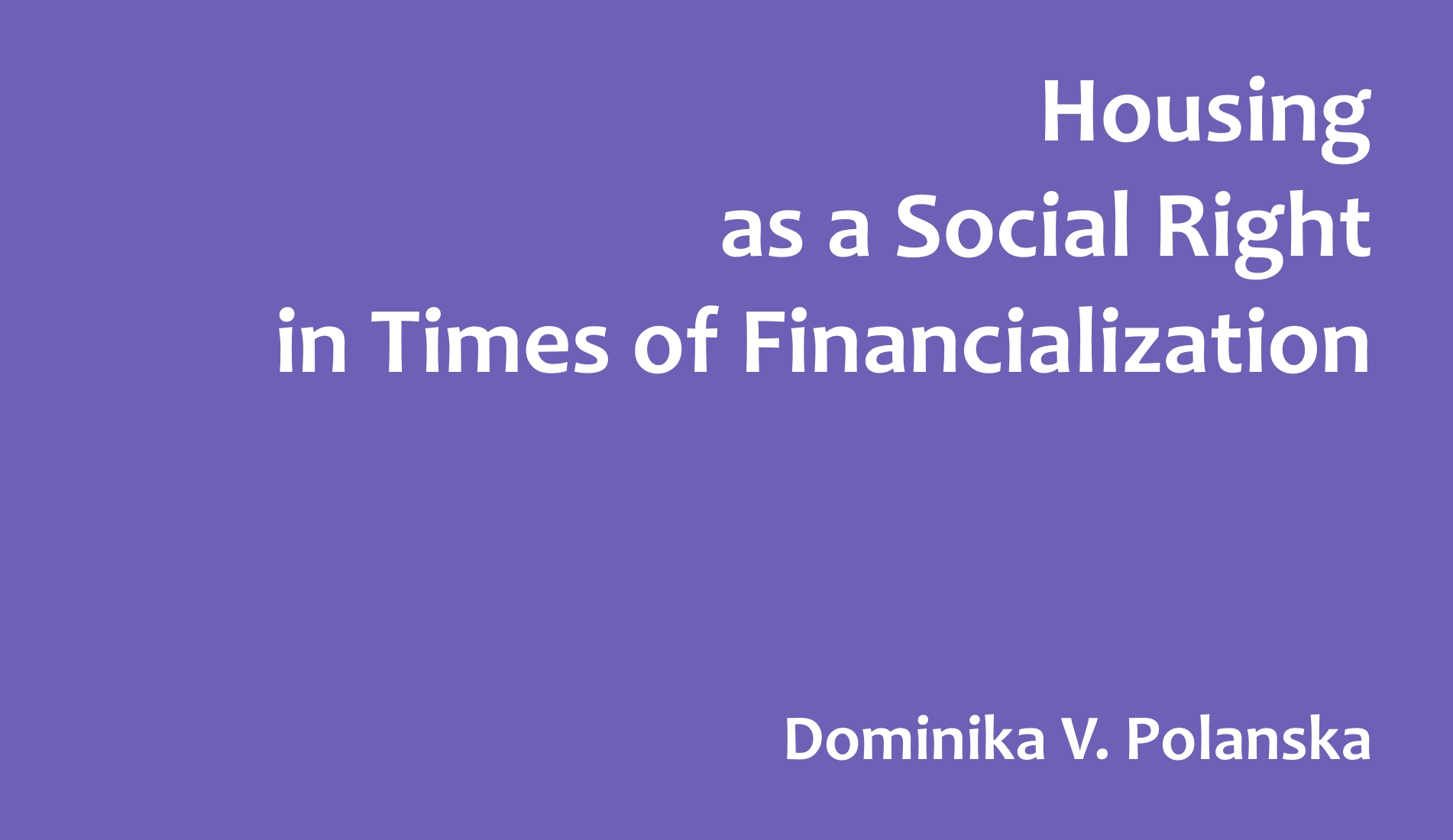 Housing as a Social Right in Times of Financialization

Housing as a welfare issue has for the past three decades gradually been eroded in Europe and beyond its borders. Globally, the issue of housing is today more about the responsibilities and opportunities of individuals to make a good living in a competitive housing market than about the responsibility of states to provide and distribute housing. How we live, especially in big cities, reflects our socio-economic status. Earlier notions about equality in housing, particularly prevalent in the Global North, are today dominated by the idea of home ownership as the superior and most attractive dwelling form (Madden and Marcuse 2016). In many European countries considerable state resources have traditionally been spent on housing, with rented accommodation afforded a special role in the design of housing policy and the provision and distribution of housing (Andrusz et al. 1996; Bengtsson et al. 2013; Kemeny 1995). Since at least the 1990s, in some cases earlier, significant changes to housing policy have been occurring all over Europe, especially in post-socialist countries. These changes have included deregulation, privatization and the withdrawal of the state both from investment in housing and from the provision of housing services. In many of these countries, affordable and accessible housing has been replaced by residential segregation and a shortage of affordable housing (Polanska 2014; Tsenkova and Polanska 2014).

Moreover, the withdrawal of state responsibility for housing has been accompanied by different methods that real estate owners and private housing companies use to make their investments in housing profitable, and by extension, to displace people from their homes. One such method is to modernize dwellings by renovating them and increasing the rent considerably. This process is called ‘renoviction’, a combination of the words renovation and eviction, and describes what happens when residents are forced to move due to extensive renovations and increased housing costs (Polanska 2017). In research, renoviction – considered a form of displacement – is a process that changes the urban fabric by forcing households to move, and that profoundly affects both those who move and those who stay (Polanska and Richard 2019; Porteous and Smith 2001; Pull and Richard 2019).

Researchers have for a long time discussed gentrification – the process of demographic change in an area due to urban renewal or the influx of wealthier groups – and assessed how it should be defined and measured. For too long, we have failed to see that gentrification, a more extensive and lengthy process than we had previously thought, is another form of displacement, and one that affects socio-economically vulnerable groups and neighbourhoods in a fundamental way. The scale of displacement caused by construction and development in recent decades is comparable to the scale of displacement caused by disasters and armed conflicts (Madden and Marcuse 2016: 3). Peter Marcuse (1985) coined the term displacement pressure to capture both the protracted character of this process and the pressure exerted on tenants who leave or stay in an area undergoing urban/housing renewal. In many cases, those suffering such pressure belong to weaker socio-economic groups – the elderly, single households, migrants and households with children – and the consequences are clear: residential segregation is deepened and the world’s homeless population is growing.

The lucrative business of displacement

Modernization of apartments from rental stock accompanied by steep rent increases is a method widely used across the globe that has resulted in the displacement of low-income households and greater housing segregation in urban and rural settings. While new rental construction is not always accessible to low-income households or accounts for a small proportion of their homes, the process of renovictions is shrinking the number of affordable dwellings and thus exacerbating the shortage of affordable housing. Moreover, international actors have found their way to the lucrative business of housing renewal, often stimulated by national regulations privileging residential property owners and investors. The process of increasing the number of financial actors in the housing sphere has been labelled ‘housing financialization’ (Aalbers 2017) and extensively described in Raquel Rolnik´s work (Rolnik 2019) on the global financialization of housing. Rolnik´s argument is as follows: housing is being transformed into a financial asset all over the globe, as a result of housing policies promoting ‘home ownership through market purchase via credit loans’ (Rolnik 2019: 3). This means that housing, which was previously viewed as a social good, is increasingly becoming commodified. Those living in rental housing, thus seen as unable to become homeowners, are those whose tenure is becoming more and more insecure due to the pressure exerted by the market to make private investment in housing profitable and to increase market values. This process is also reflected in the increasing number of insecure forms of housing, for instance with tenants being offered only short-term contracts in order to facilitate the process of renovation, along with the potential threat of displacement directed towards tenants with low incomes in areas awaiting housing renewal.

All over Europe, the financialization of housing is running parallel to the privatization of public housing (whether through sale to a private company or through tenants becoming owners), the increasing cost of housing and the consequent indebtedness among residents of European cities. This means that the role of banks and real estate owners is central and goes hand in hand with the withdrawal of the state from this realm. This is particularly evident when it comes to the regulation of obligations and rights of real estate owners and can have painful consequences for the tenants and for the urban and rural fabric.

In addition to construction, the maintenance and renewal of existing housing stock is an important part of the housing provision in a country (Turkington and Watson 2015). Combining maintenance with modernization is cost-effective for real estate owners, who use a plethora of different methods to maximize profit. Unfortunately, this means that affordable housing is disappearing from the housing stock, and that different socio-economic groups are affected by this process to varying degrees, with those at the bottom of the socio-economic hierarchy suffering the most. At the same time, housing companies have developed a ‘new’ and ‘cost-effective’ method that combines rent increases with partial modernization covering just the interior of apartments, and not the rest of the building. This means that structural works (plumbing, sewage, electricity) in the buildings are often neglected, creating a risk of burst pipes or fires in the future, but rent levels are still raised considerably. The most ironic aspect of this development is the fact that many of the private housing companies using this method are owned by pension funds, as highlighted in 2019 in the gripping documentary movie Push. The same pension funds that seek lucrative investments to deliver pensions, displace pensioners by modernizing their apartments or neglecting structural works and thus not fully addressing the risk of flooding or fire in the buildings.

Another method used by some owners of rented housing is to modernize and transform apartments in attractive areas into hotel apartments, to be rented by international companies or tourists at a price that is often unaffordable to local residents, but very favourable to the owners. This creates insecurity in neighbourhoods due to the high turnover of neighbours and short-term rental contracts. It also contributes to residential segregation through the displacement of low-income populations from these areas, as such people are often relocated to areas with a lower socio-economic status. This trend to transform residential units into hotel apartments has been observed across Europe and labelled the ‘touristification’ of cities by researchers studying (and activists resisting) this development (Sequera and Nofre 2018; Pixová and Sládek 2016).

Shifting the perspective from buildings/investments to homes

Economic and technical arguments dominate the debate on the modernization and renovation of rental apartments. The questions often asked in connection with the modernization of rental apartments centre on which technical solutions are possible and which are the most cost-effective. Economic logic is used when rental dwellings are transformed into hotel rooms, or when structural renovations are lacking. Sometimes housing companies use environmental policies to justify modernizations and their costs. What is evident is that the residents’ perspective is often absent in these discussions.

In research (Polanska and Richard 2018; 2019; Polanska et al. 2019) we have covered the voices of tenants experiencing housing renewal processes. An important conclusion we arrived at is that these voices are seldom heard and visualized not just in official debate, but also in research. Consequently the debate revolves around buildings, their technical condition, the cost-effectiveness of the modernization measures and the need for real estate owners to derive profit from their investment; they are less about the residents’ homes.

The disruption caused to homes has been reported in research for some decades now, demonstrating how profoundly people’s security and sense of place is affected when their homes are threatened (Davidson 2009; Marcuse 1985; Porteous and Smith 2001). Porteous and Smith (2001) call these disruptions ‘domicide’ – a destruction of the home due to forced relocation caused, for example, by war, new construction, urban renewal projects and the occupation of land. Their work marks a milestone in the understanding of the importance of home and the repercussions that forced relocation has on people’s security, sense of home and attachment to place (Nowicki 2014). By shifting the focus to homes instead of buildings or investments, we can grasp the severity of the disruption that is directed towards homes at a time when they are increasingly commodified on the market and when the power of slogans such as ‘housing as a human right’ are weakening and states are withdrawing their responsibility. By acknowledging and implementing the right of all citizens to a stable and affordable home, we secure a foundation for a more inclusive, equal and socially sustainable society.