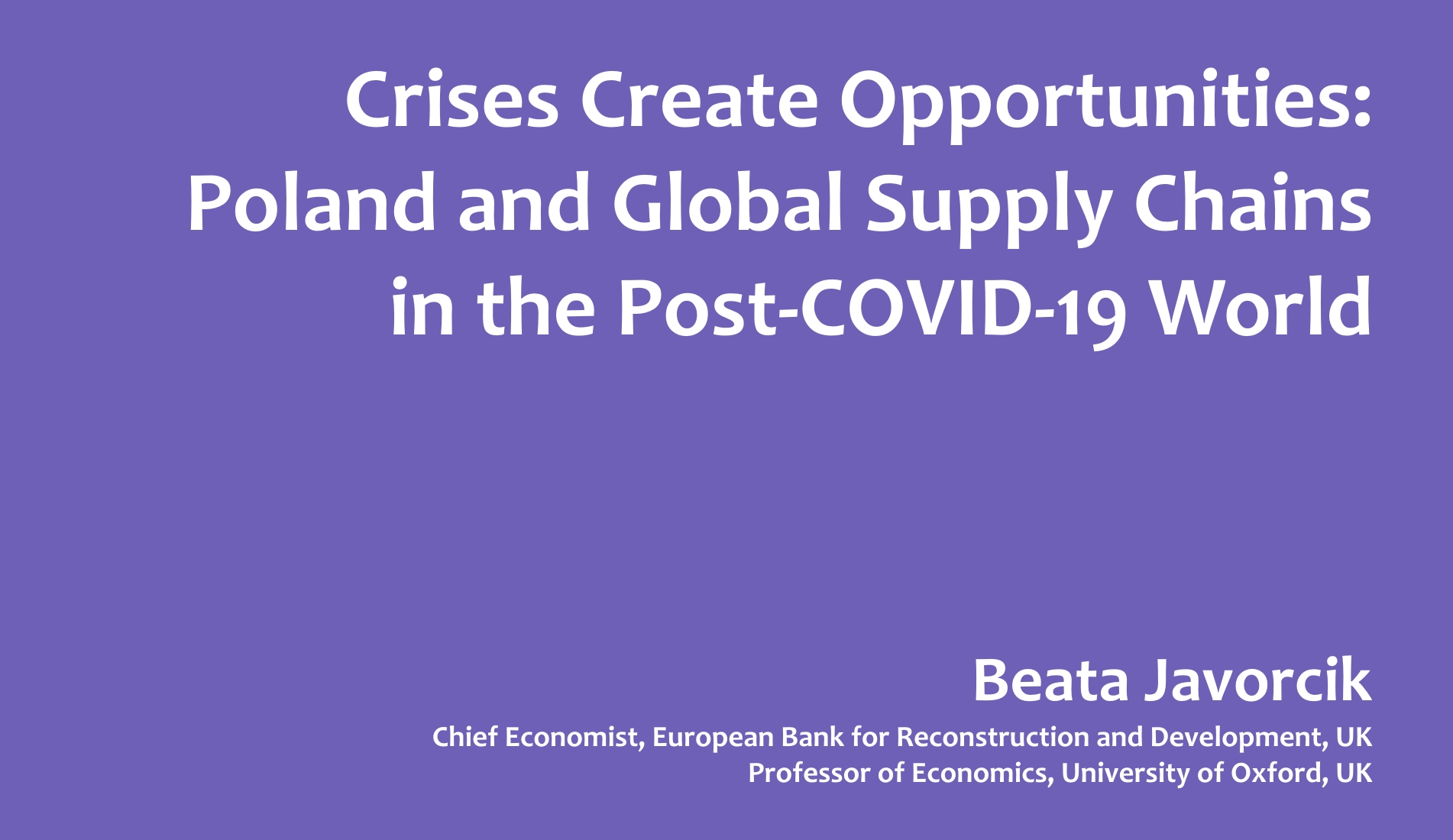 Crises create opportunities, and the COVID-19 pandemic is no exception. One of the likely consequences of the pandemic will be the rethinking of global value chains. This will create an opportunity for many emerging economies, including Poland, to increase their exports and capture a larger share of the global market, as businesses will seek to diversify their supply base away from China.

The past three decades have witnessed spectacular growth of global value chains fuelled by trade liberalization, stable trading rules and lower communication and transportation costs. The World Trade Organization and preferential trade agreements have bound tariff rates, and the WTO dispute settlement mechanism has become the central pillar of the multilateral trading system. Contrary to popular fears, even the global financial crisis has not brought about a resurgence of protectionism and trade wars.

This certainty about the state and the future of trade policy have given producers comfort and allowed firms to focus on cost optimization and ruthless cost cutting. Global value chains have begun to span the globe, placing different stages of the manufacturing process in different countries, often far from the final consumers. The incessant search for the lowest cost location has become the name of the game. Holding sizeable inventories has been perceived as wasteful, and wherever possible producers have been striving for just-in-time production.

From time to time global value chains have been rattled by natural disasters, such as the tsunami and earthquake that hit Japan in March 2011. Its impact was felt as far as North America, as Japanese multinationals in the US could not get parts and components supplied by the affected plants in Japan. A few months later, flooding in Thailand, where about a quarter of the world’s hard drives are produced, caused disruption to the production of personal computers. When Hurricane Harvey hit Texas and Louisiana in 2017, it affected US oil refineries and petrochemical producers, creating shortages of plastics and resins. Until now, these shocks were perceived as one-off events, temporary disturbances to an otherwise successful and stable business model.

But the world has changed. The combination of trade policy shocks and COVID-19 may have created a perfect storm. Each of the events by itself would not be enough to spark the rethinking of global value chains, but their combination may just do so.

Business can no longer take it for granted that current tariff commitments enshrined in the WTO rules will prevent sudden protectionist surges, particularly as the WTO dispute settlement mechanism has stopped functioning. The trade war between the US and China has not been resolved. The agreement signed between the two countries in February 2020 stipulated that China would expand its purchases of certain US goods and services by a combined US$200 billion over 2020 and 2021. According to Bown (2020), China’s imports from the US of products covered by the agreement totalled US$48.5 billion as of the end of July 2020, compared with a pro-rated year-to-date target of US$100.7 billion. In other words, China has fulfilled less than half of its commitments. Tensions related to technology exports have been on the rise. And trade tensions between the US and the EU have not been resolved either.

At the same time, COVID-19 has exposed vulnerabilities of the global supply chains to disruptions as well as what many may consider an excessive reliance on supplies from China.

The virus outbreak, which initially led to temporary closures of factories in the Chinese province of Hubei, caused disruptions in production in many continents. Hubei accounts for only 4.5 per cent of Chinese GDP, but it is a high-tech manufacturing hub, home to local and foreign firms highly integrated in global supply chains in the automotive, electronics and pharmaceutical industries.

As illustrated in Chart 1, firms in Asia and North America were particularly exposed to this disruption. About a quarter of intermediate inputs used in high-tech exports (defined as pharmaceuticals and chemicals, computers, electronic and electrical equipment, machinery, motor vehicles and other transport equipment) in the US, Japan, Korea and Mexico come from China. But even a car plant in Serbia had to stop production because its suppliers in China were unable to deliver parts.

Dependence on China can also be seen at the country level. Many countries have discovered just how dependent they are on supplies coming from China, be it for personal protective equipment or pharmaceuticals. For example, almost three quarters of the blood thinners imported by Italy come from China. This is also true for 60 per cent of antibiotic components imported by Japan and 40 per cent imported by Germany, Italy and France. More recently, attention has been drawn to Europe’s reliance on China’s exports of raw materials used to make batteries and renewable energy equipment, both of which are essential for meeting the ambitious climate targets set by the EU. This realization has led to calls urging more self-reliance and reshoring on both sides of the Atlantic.

Most importantly, however, the pandemic has drawn attention to low-probability events that may disrupt global value chains. And other such events may be underway. Scientists warn us that climate change will bring more incidents of extreme weather and that outbreaks of new infectious diseases may become increasingly common. McKinsey (2020) estimates that companies can now expect supply chain disruptions lasting a month or longer to occur every 3.7 years, and the most severe of these events will lead to a major financial toll. These events will force businesses to reengineer their global value chains. These chains were designed to maximise efficiency and profits. And while just-in-time manufacturing may be the optimal way of producing complex products, the pandemic has exposed weaknesses inherent in a system. In a recent survey, 93 per cent of global supply chain leaders reported planning to increase resilience and 44 per cent of executives reported being willing to increase resilience even if it comes at expense of short-term savings (McKinsey 2020).

Increasing resilience will mean diversification of the supplier base to insure against disruptions to a particular producer or a particular geographic location. There may be some reshoring, particularly as automation will reduce the importance of labour costs, but in many cases businesses may look for new suppliers in locations where they have not traditionally sourced their inputs. This creates new business opportunities. Just to give an example, many countries in Eastern Europe and in the eastern and southern Mediterranean have a comparative advantage in products sourced by Germany from China (Chart 2), and Eastern European countries are already exporting pharmaceutical products (Chart 3).

Chart 2. Which countries in the European neighbourhood could benefit from rethinking global value chains?

Notes: The figures pertain to 4-digit HS codes and 2018. Bubble size indicates absolute export volume in US$ million. Restricted to codes with revealed comparative advantage ≥ 3 and export volume > US$ 50 million. Revealed comparative advantage is defined as the share of a country’s exports of a given 4-digit HS product divided by the share of the world’s exports of that product.

Notes: Exports are for all pharmaceutical 4-digit HS codes.

This is highly relevant to Poland, which has comparative advantage in many products for which Germany is heavily reliant on imports from China (see Table 1 below). These include such diverse products as monitors and projectors (of which Poland’s exports totalled US$ 5.4 billion in 2018), furniture and furniture parts (US$5.4 billion), video games and table games (US$1.6 billion), washing machines (US$1.3 billion), copper tubes (US$0.2 billion), prams (US$0.1 billion) and others.

To seize this opportunity and intensify participation in global value chains, it is crucial for Poland to be perceived abroad as a country that is open for business, offers a stable, business-friendly environment and an open-minded, welcoming atmosphere for foreign executives and business partners.